Cornwall’s top badminton players took part in the annual county championships over 2 days at Carn Brea Leisure Centre at the weekend, with an exciting display of talent from players of all ages ranging from 14 to veteran. More than half of the entrants were under 20, showing the promise that the future holds for Cornish badminton, and several sets of siblings took part, including the Sillifant, Dyer and Beaumont brothers, from Launceston and Truro, the Bick twins from Penzance, and Truro’s Bailey sisters. 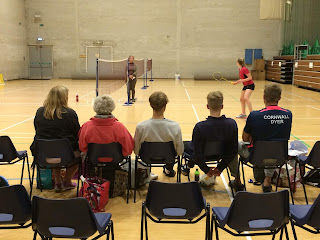 Day one started with the men’s singles event which had attracted a good entry, and the crowds were treated to some excellent badminton. All 4 seeds had fairly comfortable runs through to the semi-finals, where top seed Tyler Sillifant defeated the evergreen James Whetter from St Austell in two ends. In the second semi, it was a much tighter affair between Liam Sillifant and Harry Dyer, with the latter showing his flair and promise against his more experienced opponent. In the end, after three exciting ends of close rallies and amazing defence, it was Liam who ran out winner to reach the final again, once more against his younger brother. This was the fourth year that the brothers had met, and it was Tyler who retained his crown after a tight first end, then a more comfortable second., with his amazing court speed and consistency. 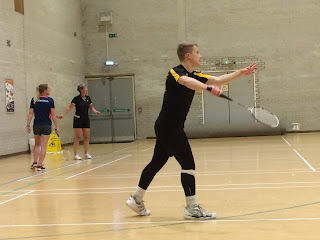 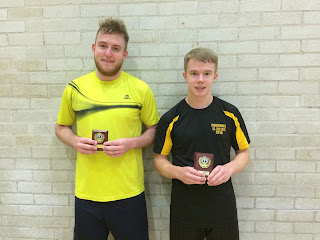 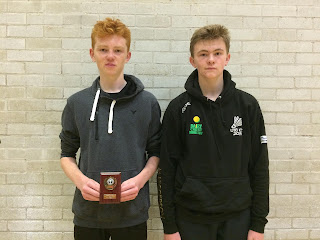 The women’s singles were made up entirely of young players aged under 18, and there were some close games and absorbing badminton on display. In the end the final match was between the two top seeds, Cara Collins from Liskeard bidding to keep her title against second seed and friend Mollie Bailey. This proved to be one of the best matches in the weekend, as Mollie just took the first end, and Cara the second, to go into a deciding set, where Cara’s speed and control proved too strong and she ran out county champion once again. 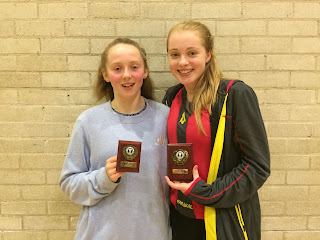 The first day finished with the women’s doubles, where the two singles opponents with their partners were pitted against each other again. Cara partnered Truro’s Melissa Lin as number one seeds against the Bailey sisters, Mollie and Beckie in the title decider, and this time the second seeds were no match for the impressive Cara and Melissa, thanks to their skilful net play, power and retrieval as they won out in two comfortable ends. 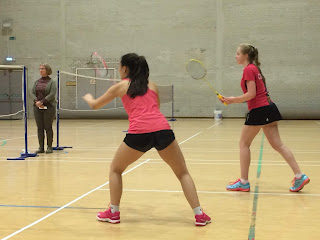 The players returned the next day for the men’s doubles and mixed events, to once again thrill the spectators and showcase their talent. 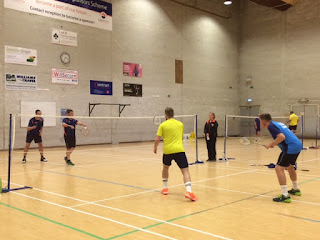 Eleven pairs contested the men’s doubles, and all four seeds duly made their way to the semi-finals, although Tyler Sillifant and his partner Sam Spencer from Perranwell were pushed hard by Camborne’s Josh Richards and Jake Turpie in the quarter finals. Top seeds and title holders James Whetter and Guy Michell were no match for Tyler and Sam and they cruised through to the final, and it was a similar story in the other semi, as Launceston’s Tom Lyle and Liam Sillifant took no prisoners against the Dyer brothers, Jack and Harry. The final turned out to be a fairly one-sided affair as James and Guy never really got going against the hard smashing, quick reactions and clever positioning of Tom and Liam, and Tom and Liam became county champions at last, after several years of trying. 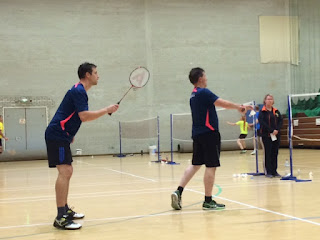 Guy and James and Lorna the scorer 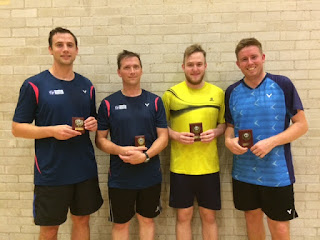 Winners Liam and Tom with Guy and James

The final event of the weekend was the mixed doubles which had some of the most exciting games of the weekend and 13 pairs taking part, ranging from new young talent to veteran players using all their experience and knowledge. One of the tightest games was between England vets from Callington, Bob Bell and Lynda Beer and new pairing James Whetter and Newquay’s Jen Pugh, where it took three very close ends for James and Jen to eventually triumph and reach the semi-finals. In another thrilling quarter final, second seeds Jack Dyer and Mollie Bailey were beaten in three by the unseeded pairing of Liam Sillifant and his partner from Camborne, Amy Polglase. In the first semi-final, top seeds Harry Dyer and Cara Collins outfought another new pairing of Guy Michell and Melissa Lin, playing together for the first time, in two very tight ends. It was the same in the other semi, as Liam and Amy took on James and Jen, and again it was Liam’s power and Amy’s finesse which won the day, despite being pushed very hard by James and Jen. 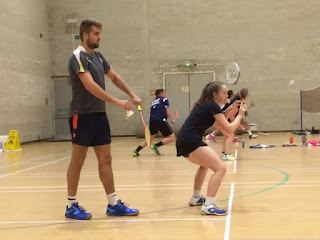 The final of the mixed doubles was the final event of the weekend, and the crowd were treated to a fine display of mixed doubles, to see Harry Dyer and Cara Collins outplay Liam Sillifant and Amy Polglase and win the title for the first time, and to give England squad member Cara her impressive hat-trick of titles for the second year in a row. 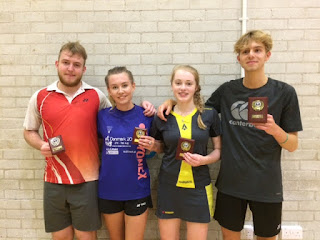 Mixed winners Cara and Harry with Amy and Liam