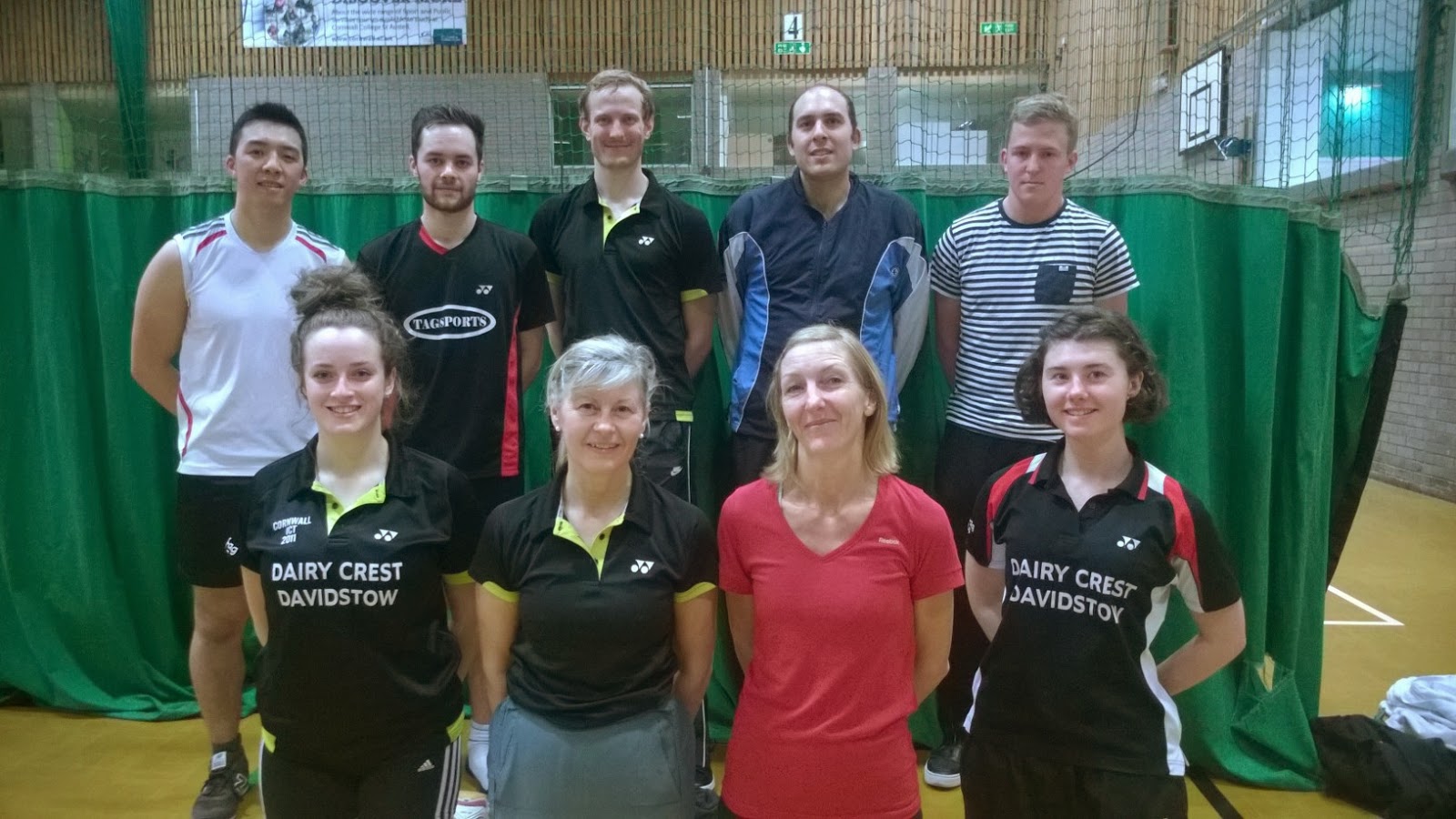 Following 9-6 wins over Avon 3rds and Dorset 3rds in the first two games of the season, Cornwall 2nds next encounter saw them take on the only other undefeated team in the league, Wiltshire 3rds. In the only change from the team which had faced Dorset the previous week, Jan Santillo replaced Lynda Beer, who had unfortunately not recovered from a back injury picked up during the previous match.

Everyone having arrived on time (unlike the previous week), the match started with the Men’s and Ladies’ Singles. The first Ladies’ Singles match saw Hester Luke take on Ella Scott-Humphris. Despite dropping the first end, Hester eventually found her range and her superior power paid off, seeing her take a 17-21, 21-11, 21-12 win and a crucial point for the team. Hester’s success could unfortunately not be matched in the second Ladies’ Singles by Beth Wotton, who found it tough going against the precise shots and good movement of Jana Axford and was defeated 15-21, 9-21.

The Men’s Singles also provided some good badminton, with Cornwall no.1 Liam Sillifant taking on another youthful player, Andrew Jones. Never letting his opponent into the match, Liam’s consistency saw him lead for the majority of both ends to claim a 21-13, 21-15 win. In the second singles, Dave Harrington took on Aiden Beardsley and, true to form, Dave was involved in a three-end epic. Despite some excellent retrieval from Dave, Beardsley’s stellar net play and long reach was just too much to overcome and Wiltshire took the rubber 21-18, 17-21, 18-21.

With the match tied at 2-2 going in to the Level Doubles, there was all to play for. The pairings saw Hester reprise her regular partnership with Vicki Thomas, and Beth teamed up with Jan to form the team’s second pairing. The Ladies’ Doubles proved to be very much a match of two halves, with both of Cornwall’s pairs notching relatively straightforward victories against Wiltshire’s second pairing of Scott-Humphris and Rebecca French, Vicki and Hester winning 21-11, 21-9 and Jan and Beth winning 21-13, 21-9. However, Wiltshire’s first pair of Axford and Hannah Laister provided sterner opposition, combining power from the back of the court with good net play. Despite the best efforts of both Cornish pairs, neither was able to beat the Wiltshire first pair, Hester and Vicki losing 21-16, 12-21, 11-21 and Beth and Jan losing 9-21, 12-21.

The Men’s Doubles saw the return of this season’s regular pairings of Dave Harrington and Rich Townsend and Kahoo Tse and Sam Spencer. As it emerged, the Men’s Doubles followed much the same pattern as the Ladies’ – both Cornish pairs secured straightforward wins over the Wiltshire second pairing of Nathan Axford and Jeremy Gummow, with Dave and Rich winning 21-7, 21-14 and Kahoo and Sam running out 21-17, 21-18 victors. However, the opposition first pairing of Beardsley and Jones again provided much tougher opposition, with both of the young Wiltshire players attacking effectively and making life difficult for the Cornish pairs by playing a very flat game. Despite taking the first end and leading for much of the subsequent ends, Dave and Rich’s trademark consistency deserted them and they lost 21-16, 15-21, 19-21. Kahoo and Sam also found their match against the first pair hard going and despite a purple patch in the second end, in which they won several points in a row to take the lead, they eventually went down 16-21, 19-21.

Having completed the Level Doubles, there was still nothing to separate the teams, with the match score locked at 6-6 ahead of the Mixed Doubles. With two rubbers required to take the match win, the home pairs would need to dig deep. The pairings saw the Jan and Rich team up for their first competitive match, Vicki and Kahoo continue their regular pairing and Beth and Sam reprise their partnership formed in the county youth ranks. Cornwall were given a super start in the Mixed, with the experience of Kahoo and Vicki proving too much for their opposition, the Wiltshire second pairing of N. Axford and Laister, taking a 21-12, 21-13 win in a match controlled from the start by the Cornish pairing. The teamwork of Beth and Sam also proved crucial in the next match to finish, with Sam’s variety of shots and Beth’s domination of the net making life difficult for the Wiltshire pair of Scott-Humphris and Gummow. Having won the first end, the home pairing recovered well from the disappointment of losing the second end to take a 21-17, 17-21, 21-16 win and secure the crucial 8th rubber (and the match win) for the team. The final mixed saw the as yet undefeated Beardsley and J. Axford comfortably take the first end as Jan and Rich found their feet. However, following a change of tactics and with a considerable dose of Cornish spirit, the home pair stormed through to take the second end. In a very tight final end, some steely serving and net play from Jan saw the Cornwall pairing recover from a 20-17 deficit to take the final end and the rubber 10-21, 21-14, 23-21.

With the match complete, the score stood at 9-6 to Cornwall, the home team having performed excellently in the Mixed to take all three rubbers. Despite being disappointed to have missed out on the third league point on offer for winning 10+ rubbers, the team will be pleased to secure a good victory against tough opposition – a win which extends this season’s unbeaten league run to three matches. Next up for the Second Team is a long trip to take on Isle of Wight 2nds on Sunday 14th December, a game in which the team will endeavour to continue their winning run and finally take that elusive third point.

Thanks go to the selectors for organising the match, to the opposition for making the long journey to St Austell and to all spectators for their support.