The best badminton players in Cornwall extending their lead at the top of the South West Division with a fine home win over Wiltshire, at Carn Brea Leisure Centre at the weekend. 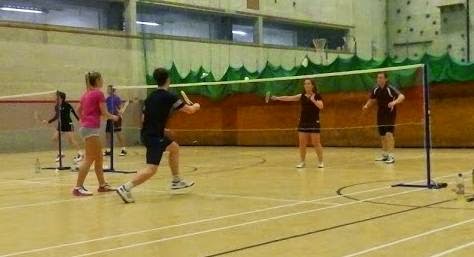 With a full strength team for the first time this season, and 2 wins out of 2 to date, Cornwall went into the match full of confidence. The men’s singles did not disappoint, with James Whetter accounting for his opponent in 2 clinical ends, although number 1 Shane Marriott had to dig deep to see off his promising young challenger in 3 hard fought ends. For the women’s singles, it was honours even – Rose Willis was her usual consistent self in winning comfortably in two ends, and Emily James just lost after an amazing first end which went to the rarely seen maximum score of 29-30.

With that good start Cornwall were leading 3-1 going into the doubles, and the men set about their games in fighting spirit – taking on the Wiltshire second pair proved relatively easy for both Shane and Ross Lashbrook, and James and Guy Michell, but the Wiltshire first pair proved elusive for both Cornish pairs – both going the distance, but losing out.

It was down to the girls to save the day, and they won all four games, much to their credit. Jo Philp and Bronwen Wotton had a close fought tussle with the first pair, but came from behind to win, and beat the second pair with relative ease, as did Emily and Rose. Emily and Rose then went on to defeat the first pair, showing great grit and determination against awkward opponents.

So the match was won going into the mixed doubles, but the home team were after the maximum three points, and swept Wiltshire aside in all three games with power and precision, to secure a great victory to keep them on top of the table.

Congratulations to Rose, Bronwen and Jo for 100% results this time, and to all the players for their fantastic team spirit and commitment.

Posted by Cornwall Badminton at 21:27