Cornwall II miss out on promotion in dying moments of season 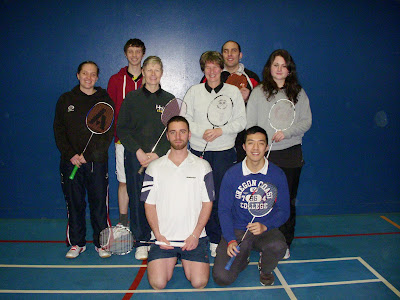 The 24th March saw the Cornwall 2nd team make the mammoth journey to Sandown for the much anticipated season’s finale against the Isle of Wight. After some intense calculations from our boys on the ferry, we knew we were a point clear of Devon, and that taking the full 3 points against the Isle of Wight would guarantee league victory and a long-awaited promotion. Having beaten the Island team 11-4 at home, our hopes were running high.

It was a promising start with Emily James, Daphne Luke and Seb Emery all wining their singles convincingly and Dave Harrington narrowly losing out to a strong singles specialist from the home team. Our momentum continued to build as Jan Santillo and Lynda Beer quickly disposed of both Isle of Wight pairings with some clinical ladies doubles. Emily and Daphne followed suit, securing victory in their first doubles match but losing out in two ends to the Isle of Wight’s first pairing.

At 6-2 up, the 3 points looked well within our grasp. However, disaster stuck, as Seb sustained a severe knee injury whilst playing his mens doubles with Dave Harrington in their first game, and had to hop off court. The injury meant he was unable to play his other disciplines. Despite an impressive debut for Chris Cooper in two well fought three-end thrillers with partner Kahoo Tse, the Isle of Wight racked up four wins in the men’s doubles to draw the match even again at 6 rubbers a piece.

A strong performance in the mixed doubles from Kahoo and Lynda inched Cornwall ahead but once again the Isle of Wight hit back, this time against the scratch pairing of Jan and Chris. Emily and Dave clinched the fixture with a tense three ender against the Isle of Wight second pair, with Cornwall gaining an 8/7 victory, and thus 2 points. Now all we could do was to agonisingly wait for the results from Devon’s match (who were playing Wilts) to see whether 2 points would be enough to gain League victory. With utter disappointment, we discovered that Devon had done enough to overtake us by winning 15-0 and attaining all 3 points, and Cornwall was yet again thwarted from gaining promotion in the dying moments of the Season.

With the league winner and promotion being decided on a point count-back, this goes to highlight that every match in the season counts. After three years of missing out on promotion, and by such a fractional margin, Cornwall II will be fighting harder than ever before next season to finally escape the clutches of Division 6.

Posted by Cornwall Badminton at 15:05