ANOTHER BUMPER ENTRY OF 115 COMPETITORS, AS CHRIS & VICKI ARE INSTALLED AS FAVOURITES, FOR THIS WEEKEND’S DUCHY OPEN BADMINTON CHAMPIONSHIPS

ANOTHER bumper overall entry of 115, drawn from a good spread of seventeen English and Welsh counties, is competing in the Duchy of Cornwall 30th “Open” Badminton Championships, with two of last year’s champions defending in two disciplines.

The prestigious Event, A Tournament in the BADMINTON England Senior Silver Circuit, is scheduled for Carn Brea Leisure Centre, Pool, Nr. Redruth, its usual Base, on Saturday and Sunday, September 22/23, writes John Tresidder. The prize-fund has been swollen to: £1,340, including £320, for the 16 losing semi-finalists in all five main events for the famous Tournament, promoted by The Cornwall County Badminton Association and, which is known, universally, as one of the most enjoyable and best organised on the English Badminton Circuit.

Main Sponsors: GRAPHIC SOLUTIONS - www.graphicsols.com - the Computer Company, from Farnborough, Hampshire, together with TAG SPORTS, Newton Abbot - www.tagsports.co.uk, in conjunction with YONEX UK LTD, have joined forces, once more, as the Tournament’s joint main sponsors. Meanwhile, The Countryman Inns Free Houses Group, from Piece, Carnkie, Near Redruth, together with Dales Renault, based at Scorrier & Summercourt and Linden Homes South West Ltd (Newton Abbot), are amongst the other generous Backers, of the Championships.

Programme-of-Events (10.00am start each day): Saturday, 22nd September: Men’s and Ladies’ Singles, followed by Mixed Doubles, extending to the semi-finals stage on the Saturday evening. Knock Out “Plate” competitions, for 1st round losers, time permitting.

Sunday, 23rd September: * Mixed Doubles Semi-finals and the Final, plus Men’s and Ladies’ Level Doubles. * NB: If the Referee feels there is a window of opportunity, then the Mixed Doubles semi-finals will be contested on the Saturday evening.

“Bleacher”, tiered seating, will be set out for players, supporters and spectators, as in past years, with the entry to the Hall and the Centre, itself, being free. Chris and Vicki favourites to retain blue ribband events: On to the play - Mid-Glamorgan’s Vicki Jones, ranked Welsh number three, along with Chris Hotchen, from Gloucestershire, the defending champions, have been installed as the favourites to retain the Men’s and Ladies’ blue ribband singles titles.

Furthermore, in the other three disciplines, the Will Hilton-Jackson/Mark Burtenshaw (both Sussex) and Sarah Gray/Alice King (Sussex/Essex) partnerships, head the seedings in the Men’s and Ladies’ Level Doubles, with Hilton-Jackson striving for a remarkable third successive outright win, with different partners.

Meanwhile, the Mixed Doubles, which comprises six pairings in the group round robin phase, before reverting to the Knock-Out format, in the quarter-finals, has the Devon duo, Mark Trebble and Heather Crump, seeded to come through as the winners, with, Cornwall’s number one players, James Whetter and Johanna Philp, who was a semi-finalist in 2011, being one of the four 2/5 seeds.

Encouraging Entry from the Host:

Meanwhile, amongst Kernow’s contingent, which is in excess of 30, the Cornwall Youth Badminton Under-17 Squad, sponsored by Dairy Crest Davidstow, makers of Cornish Cathedral City Cheese, has entered as a complete unit. Cath Bick and Sue Cooper, the CYB U-17 co-managers, commented proudly: “Our Under-17 youngsters are looking forward to the challenge and the camaraderie of this Senior Duchy Open Tournament. “And, it will prove to be invaluable in their badminton development, including providing useful match practice, for the new South West Counties Junior ICC Campaign, 2012/2013, which gets underway soon.” In addition, three members are making senior tournament debuts - Liam Sillifant, aged 15, from Launceston College, who trains at the BADMINTON England High Performance Centre, University of Exeter, together with Kellen Moore and Amy Polglase, both aged 13, so dedicated and personable - students at the Camborne Science and International Academy, Camborne. *

The Committee wish to thank the Pupils of the local Roskear C.P School, Camborne, who worked with Linden Homes South West, to provide the delightful artwork, displayed on the hall banner. And, the School Staff & Pupils and, indeed, all children, are cordially invited to attend the badminton proceedings, along with Parents and Guardians. Chairman, Linda looking forward to another exhilarating weekend: Linda Collins, the diligent and enthusiastic Chairman and Tournament Secretary of Event, who has been in post since 1988, comments: “We look forward to One & All calling into the Carn Brea Hall, over the weekend, of September 22/23, where one will be made most welcome, as usual, to witness, some more very exciting badminton, indeed.”

Finally, the comprehensive Review & Results, will be published in the Cornish & Devon Press, as well as being posted on the Cornwall County Badminton Ass’n Website: www.cornwallbadminton.co.uk 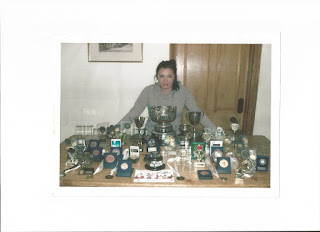 Johanna Philp, aged 19, from Port Isaac, pictured with her impressive array of badminton trophies, accrued from when she was a Cornwall Youth Badminton Star, up to the current day, as Cornwall's No. 1 senior lady player. Jo, along with her partner, James Whetter (St. Austell Bay Club), has been installed as one of the six seeds in the 30th Duchy Open’s Mixed Doubles competition. Jo was also awarded the Duchy’s Best Cornish Player Trophy, in 2011 and now looks forward to going up to the University of Plymouth, to Read Midwifery, this month, with the Cornwall Badminton Community wishing her well with her Hons. Degree Academic Studies & In-house Hospital Training.

MEN’S DOUBLES: 1: Will HiIton-Jackson and Mark Burtenshaw, both Sussex; 2: Matthew Corby and Daniel Corby, brothers, both Devon, finalists in 2011; 3: Mark Trebble and Vernon Smeed, both Devon; 4: John Hepworth and Andy Penn, both Hampshire.