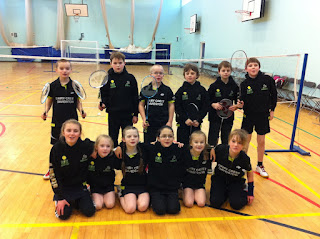 SUNDAY, FEBRUARY 5, saw the Cornwall Under-11 Team defeat their Dorset counterparts, comprehensively, by 33 rubbers to 3, at Truro School, in their third fixture of the 2011/2012 season.

And, prestigious County Colours were awarded to Amelia Burrell, Katie Phelps, Cara Collins, Charlotte Freer and Harry Dyer, before the start of the match, writes John Tresidder, with Rob Freer

The Host’s Team, sponsored by Dairy Crest Davidstow, producers of Cornish Cathedral City Cheese, buoyed on by their recent 25-11 victory over Avon, County, started the match in style, winning 10 singles matches to 2, with Amy Walker, Ellie Reed and Amelia Burrell all experiencing convincing victories in the top three berths.

Luke Sillifant, the joint skipper, playing at number one, consistent as always, out-pointed his counterpart, in two ends of play. Meanwhile, James Lush won his first match for the county in the number six position.

William/Luke and Sam/Harry partnerships seen to be in dominating form:

Joseph Tucker and James Lush managed to take two out of three games in the number three position, winning through in some very close games much to the delight of the home crowd.

The Girls repeated their achievements against Avon, again winning all their doubles matches. The number one partnership, Amy Walker and Amelia Burrell, controlled the opposition to come out on top in all of their games.

Ellie Reed and Charlotte Freer, playing at number two, held their nerve to win through a close three-ender against the Dorset first pair, with Ellie dictating the play.

Cara Collins and Katie Phelps also won, despite Katie taking a heavy fall, twisting her ankle and bruising her wrists. However, they amended their game play and Katie bravely played through the pain barrier to victory.

Following the singles and level doubles, with the match won, the good form continued into the mixed games with Cornwall winning all six events, with notable performances from Luke and Ellie at number one, Sam and Amy at number two and Harry and Amelia at No. 3.

The Player-of-the-Match was extremely difficult to select with so many fine performances, but Luke Sillifant was the deserved winner on the day.

The Team and mangers now look forward eagerly, to their final match of this campaign, a Friendly Fixture, away to Devon County on March 25.

“Great credit must go to the Under-11 Team’s co-managers, Rob Freer and Claire Reed, former county second team players themselves, in respect of the marvellous squad of youngsters they have assembled and helped to train and coach.

“Indeed, it bodes well for Cornwall’s future and for the Under-13 Team, when the Children get older and leave the ranks of the younger age group, with so much experience on board.”