THERE was a very high standard of play, with camaraderie to the fore, once again, in the Duchy of Cornwall 29th Open Badminton Championships, which was contested at its Home Base, Carn Brea Leisure Centre, Pool, Near Redruth, over the Weekend of September 17/18, writes John Tresidder.

The prestigious Event, A Tournament in the BADMINTON England Senior Silver Circuit, with a prize fund totalling £1,260, also held two distinguished presentations on the second day.

Indeed, the famous Tournament, promoted by The Cornwall County Badminton Association, is known, affectionately, as one of the most enjoyable and best organised on the English Badminton Circuit.

Another bumper overall entry of around 100 players - with fifty and nineteen in the men’s and ladies’ singles, respectively - competed in the Championships, with competitors drawn from a good spread of English and Welsh Counties.

Meanwhile, Gloucestershire’s Chris Hotchen, the favourite, retained the Men’s Singles title, when he defeated, Will Hiton-Jackson, (Sussex, No. 2 seed), 21/17, 21/15. in the corresponding blue ribband discipline.

Miss Jones, in tandem with Nicolas Strange (South Glamorgan), went on to harvest the Mixed Doubles, in the early evening, to make it a glorious brace of titles on the first day, when overcoming the challenge of John Hepworth and Kelly Holdway, Hampshire’s top seeds, 21/16, 18/21, 21/12.

DAY TWO witnessed another feast of badminton in the Hall.
Kelly Holdway, Hampshire’s County First Team player, whilst partnering Elena Johnson, recorded a third Duchy trophy, defeating Jo Philp and Nicole Jacobs, the Cornish/Middlesex outfit, 21/8, 21/8. However, Jo and Nicole, a scratch duo, were seen to gell very efficiently and may well team up for another English “Open”, in the near future.

Men’s Doubles proves a fitting finale to an exhilarating weekend:
The proceedings were seen to go to the wire, with past champions, Devon’s Corby Brothers, Dan and Matt Corby, putting up a spirited performance, before going down, narrowly, to the Will. Hilton-Jackson and Daniel Charteres Susses/Hampshire combination, 20/22, 22/20, 28/26.

Many agreed, that the power play and exhausting rallies, would not have looked out of place on an International court, at times and had the spectators on the edge of their seats, throughout – therefore, congratulations, all four gentlemen.

On the Saturday, she turned out with her usual “Open” partner, Dave Edgar, Cheshire, as one of two 3/4 seeds, to reach the Mixed Semi-finals, before winning through to the Ladies' Final, with Nicole Jacobs, on Day 2.

As a reward, for her efforts, she became the recipient of the 2011 Best Cornish Player, trophy, for the second year in a row.

Jo is a Midwifery student at Truro College and next Autumn, the bubbly and popular Port Isaac lady has ambitions to go up to the University of the West of England (UWE), Bristol, to read Midwifery, as well as to obtain a place at the University of Bath’s National Badminton Academy, which is renowned.

Young Hampshire badminton star catches the eye:
There was a most polished performance from 15-year old Kelvin Latimer, unseeded, from Portsmouth, an England Under-16 squad member, who reached the Men’s Singles semi-finals, going down, in style, to Will Hill-Jackson, the eventual runner-up, 21/15, 18/21, 18/21.

However, the talented young man, such a gentleman - on and off court - was awarded the 2011 Sporting Spirit Trophy. He is coached by Jack Webb, a past singles winner, and proved he has the potential to become a Duchy champion in the not too distant future – in 2013, possibly.

In addition, the writer is pretty confident Kelvin will progress to the England Badminton senior ranks, one day - watch this space.

Welcome callers to Hall:
Amongst the welcome callers, were Emma Austin, the BADMINTON England Development Officer, for Cornwall & West Devon and Mr. Paul Smith, the Headmaster of Truro School, in whose whose Sports Hall the Kerrier Junior Open and the England Bronze Tournaments are held.

The Countryman Inns Free Houses Group, from Piece, Carnkie, Near Redruth, together Dales Renault, based at Scorrier and Summercourt, were amongst the other generous backers, of the Championships.

Cornwall County and CYB well represented:
There was another good turn out, from Cornwall, the host, of over twenty players, including a healthy contingent of youngsters from the successful Cornwall Youth Badminton (CYB) Organisation, which has Jenny Marchant at the helm, as Chairman and a Main Sponsor in Dairy Crest Davidstow, of the Cornish Cathedral City Cheese Company.

David on the referee’s console:
David Burgess, an experienced International Referee, based in Barnstaple, North Devon, was the official in change. David has been in position, on his referee’s console, from 1985 – 2011 and has decided to retire this year. 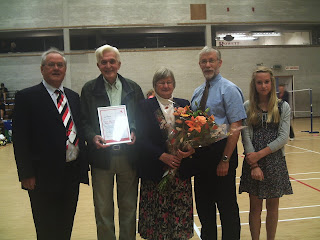 Firstly, Mrs. Linda Collins, the Tournament Chairman and Secretary, on behalf of her Committee, proceeded to give thanks and presented Mr. David Burgess, an International official, from Barnstaple, North Devon, the retiring Duchy Open Referee, of 26 years, with a delightful cut-glass wine decanter, inscribed, supplied by Trophyman, Camborne.

Alan, Mr. Cornwall Badminton, a player, coach/administrator, a Co-founder of the Duchy Open and a Plymouth Argyle Football trialist, in his Youth, is the current President of Cornwall Youth Badminton, as well as being the Chairman/Coach of the First Edition Junior Badminton Club, based in Pool, near Redruth, sponsored by the Redruth Charity Trust.

It is the second time that Cornwall has been bestowed with this supreme England, “Lifetime Service” honour, with the Late Mrs. Pat Hollands, MBE, Reawla, near Hayle, being in receipt of hers, in 1998 and Mr. Burgess granted his EBA in 2007.

Anne and Colin Ransley, together with Lester Lashbrook and Dave Philp, did a sterling job as helpers, including with the poular “wine and nibbles” event.


Mrs. Collins wishes to give thanks to the following:
Mr and Mrs. Andrew, Cheshire, the Duchy’s Guests-of-Honour, David Burgess, the Referee, the sponsors, players, supporters, spectators and helpers, alike, as well as the Carn Brea Leisure Centre Management & Staff and the ZestCafe, who served up the delightful and well received lunches, over two days.