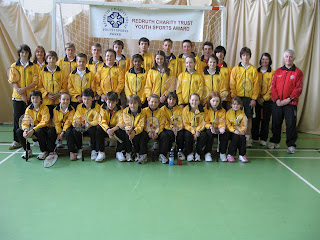 CORNWALL College Sports Hall, Pool, Near Redruth, the home of the First Edition Junior Badminton Club, was the scene of an exciting donation of new track-suits on Saturday Morning May 10, writes John Tresidder, with Paul Martin.

This was made possible by a generous gift of £1,100, from Redruth Charity Trust Youth Sports Award, whose Chairman Mr Chris Hailey, attended to witness the official presentation.

For the Club, which is one of the strongest and most buoyant in the County - with many very talented youngsters in its ranks - it was an unprecedented occasion of support, which, thus, allows the youngsters, in the future to display an identity to match their undoubted skills. And, without the help from the Redruth Charity Trust, this could not have come about.

One of the previous donors to the Trust, Mr David Pascoe, the Group Chairman of the Penventon Park Hotel, Redruth, together with Mr Hailey, made the official hand-over to young Imogen Powell, a Truro School student, already a multiple County champion at the age 13. 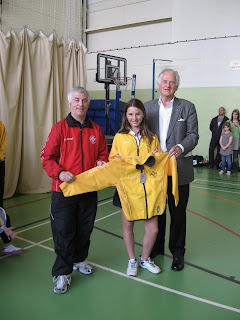 All the recipients, who will wear the tracks suits with pride, are deeply indebted to the Trust for its generosity in making this happen.

Meanwhile, on Saturday May 17, fifteen players from the Penryn Saracens Junior Badminton Club travelled to Cornwall College, Pool. to experience their first ever competitive badminton match.

This event was a prelude to a new West Cornwall Junior League, getting underway in September for the 2008/2009 season.

The majority of the Penryn Saracens Team have only been playing badminton since January, of this year and turn out at Penryn College on Monday evenings, from 5.30 - 7.00pm.

There was fourteen youngsters per team, seven aged Under-12 and seven Under-10.

The match consisted of an hour and a half of “Half-court” singles, with strong support from parents of both teams in attendance.

First Edition eventually ran out winners by 125 points, with over 2,000 points of badminton being contested:

The match trophy was presented to Ellie Watkinson, the youngest player in the match by Mr Alan Williams Life President of Cornwall Youth Badminton and Chairman of First Edition Juniors.

There followed a friendly match with the more senior First Edition players, playing alongside the Penryn Team.

Teams that have already registered their interest are;

Mounts Bay BC.
First Edition BC.
Penryn Saracens BC.
Helston BC.
Truro BC.
Truro School.

The First Edition Junior Club wishes to thank all the helpers on the day – including Lucy Stocker and Sue Cooper, together with the support of Paul Martin and Alan Williams.
Posted by Cornwall Badminton at 09:12